"The war never stops." It's just that today it appears with a new look, one of which is the "trade war."

Origin of the event

After the U.S. International Trade Commission (ITC) announced its preliminary anti-dumping ruling on mattresses from seven countries on October 28, 2020, on March 19, 2021, the U.S. Department of Commerce announced that it would make an anti-subsidy affirmative decision on mattresses imported from China. Cut. On April 26, ITC made a final ruling, ruling that anti-dumping and anti-subsidy were established. The execution time of the order is updated to May 3, 2021. The anti-dumping duty rates finally determined by the 7 countries are:

Some American mattress manufacturers: Is this the result of fair competition?

As soon as the ruling came out, two completely different voices emerged within the American mattress industry.

One voice came from the coalition that filed anti-dumping and countervailing applications. The verdict represents their victory, and mattresses from the seven countries that want to export to the United States will encounter greater resistance. On the other hand, the amount of anti-dumping and countervailing subsidies will not enter the US Treasury, but will be used to subsidize the companies that filed applications-which shows how happy this party is.

In addition, many mattress manufacturers in the United States expressed support for this latest move, believing that it paved the way for "fair competition." Analyst Raymond James said, “Although we still need several months of data to determine the extent of the impact, for the US mattress industry, the decline in mattress imports in the past three months compared to last year is very encouraging. In addition, the seven countries targeted by the anti-dumping case all show that mattress sales are declining year by year, which should indicate that the production and supply chain is changing." 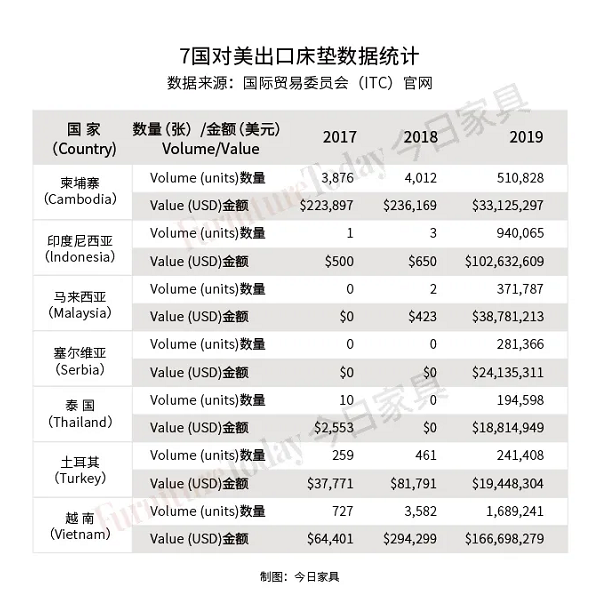 Marc Werner, the founder and CEO of Ghost Bed, said, “As many people are currently facing supply chain shortages, I will not ignore the inappropriateness of this ruling. However, I believe that it brings Long-term benefits will far outweigh short-term challenges. This ruling will be a big boom for domestic bedding manufacturers, especially e-commerce. We have personally experienced the decline in domestic production that is hitting a wall in competition with imported products. Recently online sales The same is true. The new regulations, coupled with consumers’ preference for online mattress purchases, will help increase demand.

“Southerland’s President and CEO Bryan Smith said that all parts of the industry have been affected by the anti-dumping case. “Port congestion and shipping delays continue to complicate distribution channels, and many dealers turn to domestically produced alternatives. This creates an advantage for us in the industry. "

As the number of imported mattresses continues to decline, some domestic mattress manufacturers are preparing to expand further.