While many people may not get a full eight hours of sleep each night, they wouldn’t necessarily categorize themselves as sleep deprived.

But those who get less than seven hours a night should be aware they are not getting enough sleep.

In his book “Why We Sleep: Unlocking the Power of Sleep and Dreams,” Matthew Walker, professor and director of University of California, Berkeley’s Sleep and Neuroimaging Lab, cites research that suggests sleeping for only six hours a night for 10 days can impair a person as much as someone who has been awake for 24 hours.

While you may not feel particularly tired after short sleep, a number of signs could point to sleep deprivation, according to a Jan. 2 article in Real Simple. 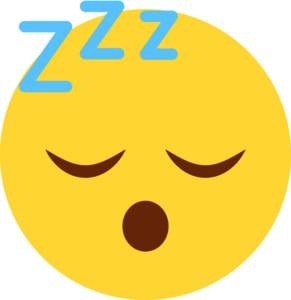 Keep a lookout for these seven signs:

1.You’re exceptionally moody. Sleep and mood go hand in hand. Sleep deprivation has been linked to anxiety and depression and even shorter bouts of sleeplessness can lead to irritability, crankiness and difficulty dealing with stress, the article said.

2.Your productivity and performance are slipping.When you don’t sleep enough, it affects focus and reasoning. According to Harvard Medical School, insomnia is estimated to cost the American economy $63.2 billion annually in lost productivity. The takeaway — don’t work into the night to finish a project. Get some rest and start again recharged the next morning.

3.Your appetite is insatiable and/or you’re gaining weight. A 2004 Wisconsin Sleep Cohort study found that people who slept fewer than six hours a night were more likely to be overweight, thanks to a reduction of the appetite-suppressing hormone leptin and increase of the hunger-stimulating hormone ghrelin.

4.Your skin is suffering. Even small amounts of sleep deprivation affect your appearance, bringing red, puffy eyes and dark under-eye circles, the article said. Concealer can only cover up so much.

5.Your judgment is faltering.When you don’t get enough sleep, the prefrontal cortex, the region of the brain involved with emotional processing, goes to sleep, according to Harvard Medical School sleep researcher William Killgore. Without good emotional processing, you will have difficulty reading social situations and making good decisions, the article said.

6. Your libido’s flagging. Untreated sleep apnea has been linked to a loss of sex drive in women, according to a study in the Journal of Sexual Medicine. And women have cited fatigue as an important factor in not wanting intimacy.

7. You’re getting drowsy during the day. This might seem obvious, but getting sleepy during daytime hours is a signal you shouldn’t overlook.

If any of these signs sound familiar, take time to power down before bed. “Whether you’re watching TV or engaging in social media, the experience can be very psychologically stimulating, increasing alertness and making it harder to fall asleep,” said Lauren Hale, a professor in public health at Stony Brook University in New York and former editor in chief of the Sleep Health journal. She suggests reading, journaling, stretching or meditating to help wind down.